Nosebleeds are a fairly common occurrence, particularly in children, and are usually treatable at home without any medical intervention. They occur when the small, delicate blood vessels in the lining of the nose burst. This can occur in one or both nostrils, causing large amounts of blood to drip from the nose and sometimes the sensation of fluid flowing down the back of the throat. Usually the bleeding stops within ten minutes.

Common causes of nosebleeds can be a blow to the face, falling on the face, picking the nose, sneezing or blowing the nose too hard, and exposure to cold, dry air that dries the lining of the nose and causes it to crack. Infections of the airways, sinusitis and recent nasal surgery can also cause nosebleeds. During pregnancy the blood vessels in the nose expand and are more prone to bleeding. Certain medicines, especially those used to thin the blood such as aspirin or warfarin can predispose a person to nosebleeds. Some of the medicines used to treat allergies can cause the nasal membranes to dry out, and nasal spray overuse (decongestants) can also contribute to nosebleeds. As we age our blood vessels weaken and hence we are more prone to nosebleeds as are those people with blood disorders.

Treatment for a nosebleed involves pinching the nostrils on the soft part of the nose, just below the bone, until the bleeding stops. For young children, you may have to do this for them, while providing plenty of reassurance as they can find it quite scary. Get the person to sit up and lean forward slightly so that the blood drains out of the nose rather than down the throat. A covered ice-pack (or bag of frozen peas) can help constrict the blood vessels and slow the bleeding.

Once the bleeding has stopped, tell the person not to sniff, pick or blow their nose for at least 15 minutes and not to undertake any strenuous physical activity (including heavy lifting) for at least 24 hours. They should also be careful to avoid alcohol and hot drinks. Tell them not to remove any crusts or scabs that have formed inside the nose as these are part of the healing process. If picked off the bleeding may start again. If the person needs to sneeze, doing so with an open mouth can decrease the pressure in the nose.

If pressure has been applied to the nose and the bleeding has carried on for longer than 20 minutes, it is time to get to the nearest hospital. Medical intervention is also required if bleeding is very heavy, if the person has an irregular heartbeat or is breathless, or the person is vomiting due to swallowing large amounts of blood.

Medical treatment for a nosebleed can include packing the nose with a gauze pad or sponge to stop the bleeding, or cauterizing, which is when the blood vessels are burned to seal them off. If the wall between the nostrils is crooked, this can cause nosebleeds and septal surgery to straighten the nose can improve this. Ligation is another option, which is where blood vessels are tied off during a surgical procedure.

In many cases nosebleeds are preventable. Blowing the nose gently, not picking the nose (keep children’s fingernails short), not overusing decongestant nasal sprays and using vaporisers to keep the air humid or saline nasal sprays if the nose is dry can make a big difference. Use a headguard if playing contact sports and avoid smoking, alcohol and hot drinks as these can expand the blood vessels in the lining of the nose. New Zealand was the 48th country to have a confirmed case of COVID-19. As of 7 April 2020 there are currently 1,160 confirmed and probable… Read more » The Heart foundation has recently released research that shows that plant based diets are best for your health. This does not mean we all have… Read more » 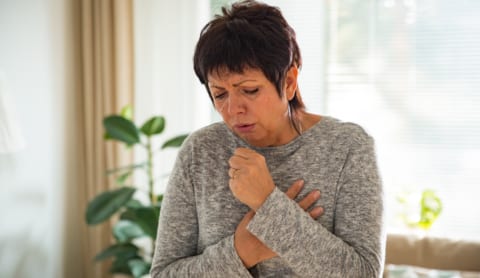 A cough occurs when the throat or airway has been irritated, usually by mucus or foreign particles such as dust or smoke. It is the… Read more »